Dieter List works as an artist right from the beginning with wooden clothespins and with plaster bandages. While today the plaster bandages play the predominant role in his "ThreeViews" or "Pure" objects, at least one clothespin is visible or hidden in every peace of art of him. Clothespins are the common thread, perhaps his trademark, in all his works.


So since its beginnings in 2011, wooden clothespins have been essential to in his artistic work. This is how the name Klammerkunst (clothespin art) came into being, and so is the name of his other artistic website: www.klammerkunst.de

These clips are available in different sizes and colors, as well as natural wood. In his creations, List uses the different nature of the clothespins and their diverse design options. He varies the combination and attachment of the brackets in such a way (to each other or other materials) that in conjunction with appropriate lighting the visual effect changes.

His aim is to put the everyday object wooden clothespin in a different context and thereby alienate.

In addition to the materials plaster bandages and paper mache, the wooden clothespin is the recurring feature of his work. Where he uses it alone, without any other materials, he uses it as part of a sculptural element that only gives rise in its entirety to a new idea.

If he uses the clothspin in conjunction with other materials, it serves various purposes. If he uses clothespins flat, rather inconspicuously, he intends thereby a slight break in the view of the observer, an alienation effect. On the other hand, if he wants to emphasize the clothespins more spatially than a three-dimensional body, he intends that the clothespin gets its own meaning through light and shadow.


In all works, List uses a stretcher frame as a base.
His works with clothespins as the dominant element can be divided into three styles, depending on the additional materials used:
Some of his works consist of pure staple objects, these are variations of the spatial arrangement of the brackets. 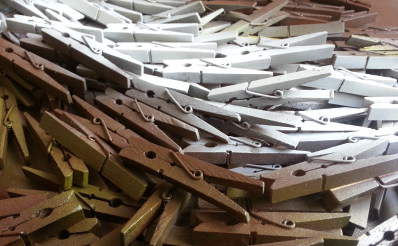 In addition, materials have been used that allow other surface structures and shadow designs. You will find these under objects with paper mache. 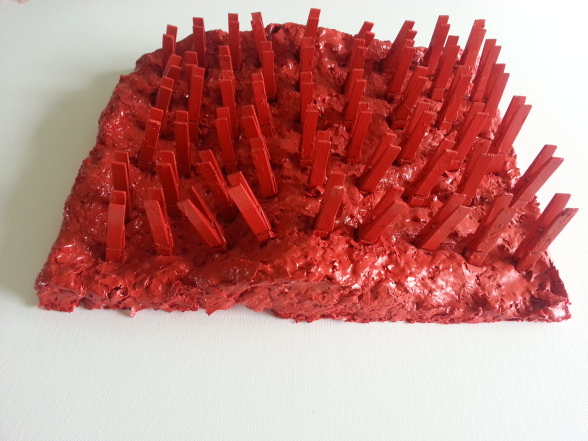 As with the paper mache works, the works with plaster bandages, List's preferred material, are characterized by a lively structure of the material.

Unlike the newer "ThreeViews" objects, in which the clothspins appear in the background rather used as a quote, in the earlier works with plaster bandages the clothespins still play a dominant role.


Here is an example: 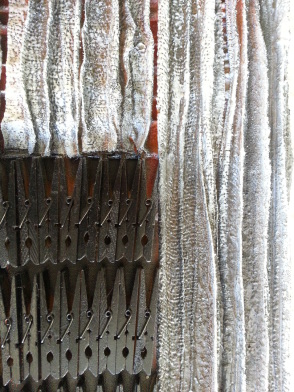